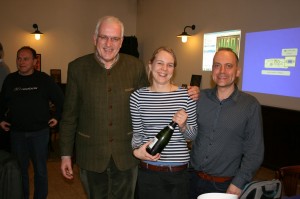 Leading 2-0, Geert needed only to win a single set to 11 points in order to beat Guy Van Middelem and grab the title. The match was played on Friday evening, December 20, in front of a live audience in Café Sport in Leuven. The players were sitting in one room and the audience in another room, where they could follow the match which was projected on the wall. 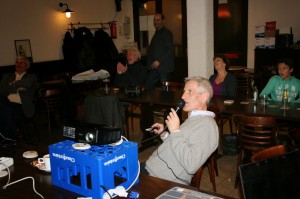 Michel Lamote showed himself a witty and funny commentator, pointing out clues in complex positions. With a second projector, the live computer analysis was shown simultaneously, Luc Palmans efficiently recording the match in eXtreme Gammon. About a dozen spectators enjoyed the instructive and entertaining backgammon show. 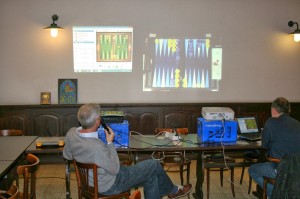 Geert and Guy played an excellent match, with amongs others a complex game with turned from a backgame for Geert into a backgame for Guy. The dice favoured Geert, however, and despite the enthousiastically cheering audience, Guy did not find the hitting and racing numbers which he needed to turn the tide. 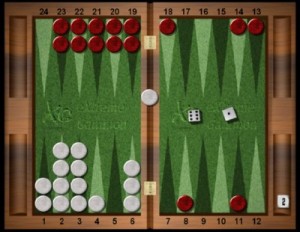 Even when Guy, trailing 0-6, finally did seemed to win a well-deserved game, the horror-struck audience saw Geert launching an improbable 6-1 from the bar, leaping over Guy’s five prime and hitting a builder on the bar point. In turn, Guy danced on Geert’s half-broken home board, missing a precious direct shot from the bar. At about half past ten, Geert brought his last checkers home, winning the set, match, and title with 11-0. Download the match record: 2013-12-20-Guy-Geert-11p-3 (txt format, can be imported into GNU Backgammon as well as eXtreme Gammon). 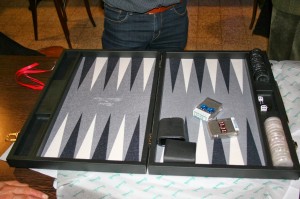 Geert’s precious trophy was a luxury backgammon board kindly offered by Mr and Ms Akbar and Fakhri Soltani-Salasi. In return, Geert invited the audience on a fine bottle of bubbles.

The scoop was texted immediately to a reporter from Het Laatste Nieuws, just in time for the breaking news to make it to the weekend edition of the newspaper. The article was published together with a fine picture of the two finalists, taken by a professional photographer who had come by earlier that evening. In the article, the Belgische Backgammon Federatie was called by name.

The event was organized by the Backgammon Club Leuven and supported financially by BGFed.be. We are especially grateful to Maurice Vanderauwera, the landlord from Café Sport, for making two rooms in his popular pub freely available on a busy Friday night and for helping us out in setting up the installation for the recording and projection of the match.

This entry was posted in BIC and tagged Leuven. Bookmark the permalink.