In  Budapest (2015) and Helsingor (2016) Belgium competed with grit and determination. In both campaigns the qualification for the Final Four was missed by the smallest margin. 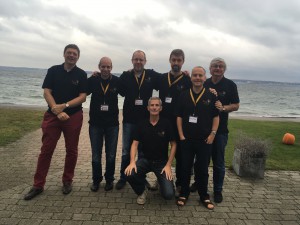 This year the EUBTC will take place in the capital city of Iceland, Reykjavik (5-6 October 2017).  This team event is prestigious because it reflects the current standard of a country’s backgammon community. Achievements in previous European Team Championships  have earned Belgium a good reputation (prestige). This is what is at stake in Reykjavik.  Therefore, BGFed.be hopes to be represented once again by a motivated and competitive team (4-7 players) :  Belgium’s Best.

Selection of players will be based predominantly on empirical data, i.e. conglomerate PR’s as reflected in both the BMS GT (Grading Table) and the BPR RT (Ranking Table).

Since (a) skill in backgammon dominates as match length increases and (b) the BMS GT reflects PR’s obtained in longer matches, a higher weight will be given to BMS gradings than to BPR gradings.

In the case that Candidate Players have no official BMS or BPR grading, selection may be considered based on data available in the BMS(BE) archive.

Should the difference between two players be too close to call (0,15 PR), factors like international experience with longer matches will be taken into account.

d) have an official BMS or BPR grading  or be BIC player.

The final selection for Reykjavik 2017 will be made once the performances (PR’s) in this event have been incorporated in the BMS GT.

This entry was posted in EUBGF, Tournaments and tagged Reykjavik. Bookmark the permalink.