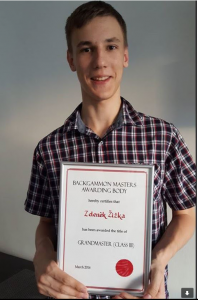 A couple of months ago (March ’16) the BMAB event in Vienna, Austria, was won by Zdenek Zizka  from the Czech Republic with an overall PR of 3,52.  He has since then been awarded the official BMAB (Backgammon Masters Awarding Body) grading of Grandmaster (Class III) with a PR of 3,84. In an effort to improve on his rating, he will play in Brugge on 23-24 July 2016. He will be accompanied by his mentor Honza Czerny and by Pavel Zaoral, two Czech players of Master level.

The American backgammon pro Phil Simborg did an interview with this talented youngster for the on-line magazine GammonVillage. We are allowed to publish some excerpts :

(Chiva Tafazzoli, President of the World Backgammon Association, on “the Czech group”) : The members of the Czech group are all extremely nice people. They have been regulars at the monthly tournaments in München. On Saturdays, they drive 4 hours from Prague to be on time (never late) and after the tournament, around 10pm, they drive back to Prague, another 4 hours. That’s dedication!

Zdenek (about himself) : I started to play backgammon when I was 5.  My dad was working in a restaurant where they had a backgammon machine and he showed me and my mom how to play. During our vacations in July and August we would play tens and tens of games on a small wooden board. That was our favourite family game and the experience was invaluable in helping me understand checker play strategy without the cube. As you know, even with the cube, knowing how to play at DMP is quite important.

Zdenek (on studying backgammon) : The only book I ever read was Boot Camp by Walter Trice, but I think it really did not help me so much. I teach myself by importing my matches into XG and studying my mistakes. I have had eXtreme Gammon since 2013 and it is a great learning tool. I think most of the top players in the world would not be near as good without this wonderful machine.

Zdenek (on backgammon heroes) : I have a lot of respect for players who can play at the highest levels and still control their emotions when losing. I do not like loud people and people who complain all the time. It is unpleasant and ruins the game and the atmosphere. If you can’t handle bad luck, then backgammon is not the game you should be playing.

Zdenek (on  his aspirations) : I am concentrating on mathematics in school. I am not exactly sure what I want to do, but it will have something to do with money, statistics and probability. Backgammon is not my life, but my life is like backgammon – full of luck, decisions, studying probability and statistics. If there is a way I can make a career teaching and playing backgammon some day, that would be great.

So, this young prodigy will play against some of Belgium’s Best on 23-24 July. You can still register for the event (before Sunday 17 July, midnight) if you play at Advanced level or better. 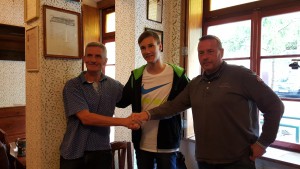