The Alligators of the Cayman Islands

It’s not my habit to (ab)use this website for communicating personal messages, but the recent events in the Caribbean reminded me at a personal hurricane I experienced when I was active in that part of the world, a very long time ago.

A business partner from Panama (a country only famous for its canal and baseball players) informed me about an interesting job offer at the Cayman Islands. Because economic prospects in Europe were those days not high, I tried my luck. Tests and interviews went very well, and to make a long story short: I got the job. There only remained the discussion about my moderate fee. A meeting with the CEO of the firm was arranged.

At the parking of the impressive office building, the security didn’t show much interest in my Lamborghini, and finally there was an apprentice who was willing to park my car somewhere in a faraway corner, behind the Rolls Royces and the Bentleys.

At 13:56 sharp I presented myself at the desk. A six-foot high beautiful blond secretary directed me to the office of the CEO at the end of a long corridor. The renaissance paintings and 18th century classical sculptures gave me the feeling that I was in the Uffizi in Florence. But I must also confess that my eyes were mostly blurred by the bumping derrière of the secretary. And the sound of the 16 centimetre high steel point heels, who mercilessly tortured the marble floor, ricocheted several days in my ears.

I was received by the CEO in a luxurious conference room with another marble floor and more pictures, sculptures and antique furniture. I took place at a long table; at the opposite site there were sitting three people. In the middle there was Xavier, the CEO, who did most of the talking. A woman and a man were sitting next to him and they only agreed with what Xavier was saying. The name of the man was “De Herdt” or something. I don’t remember the name of the woman, but she reminded me at the actress who played Snow White in a movie I saw in my childhood. A butler served us drinks and remained in the room.

After some introductory small talk, and a discussion about the results of my tests came finally the big moment: the money. How little would I earn if I joined the firm?

Before I continue I will explain something about the payments and taxes on the Cayman Island, for the few readers who are not familiar with this. There are three sort of payments: a normal fee, an extra fee and a super extra fee. Of course, on the Cayman Island we gladly like to pay our taxes. After all, someone has to pay the roads to our gated communities, don’t they? Not surprisingly, there are also three sort of taxes: a normal, an extra and a super extra.

Xavier gave me the choice between two propositions. Without going into details, the difference in these propositions concerned mostly the timing of payment.

I don’t claim that I can write and read, but I can count figures. Especially when there are $- or €-signs behind these figures, not to mention Swiss Francs. I had no doubts. “Pay me now” was the best for me: Highest fee and lowest taxes. That’s my idea of a contract.

“I take the second proposition,” I firmly stated, with an air of “I am a man of the world and you can’t fool me”.

Xavier observed me a long time with a poker face, and then slowly asked: “Are you sure?”

I didn’t have to look again at the figures. I was never so sure in my life.

“I take the second proposition,” I repeated, and I made a personal note that in a next life I should be an actor in mafia-movies.

Suddenly, I heard the butler behind me scream “Yeees!”. Xavier, Snow White and De Herdt jumped out of their seats, jelled some sounds and started to make high-fives. Immediately, Xavier took the contract and put it under my nose, and pushed a Mont Blanc fountain pen in my hands.

I must confess that I was a little bit surprised by their reaction, but before I realized what was happening, I had put my signature under the contract, and immediately a security guard grabbed the documents out of my hands and would undoubtedly hide them in a safe, deep down in the cellars of the building.

The celebrating Xavier and his associates didn’t notice me anymore and another security guard guided me politely but firmly out of the room. I left the building via a backdoor, where the Latino cleaning ladies held their smoke break.

The apprentice at the parking threw the keys to me, and while I was searching my car, I was still wandering what had happened. I was 100% sure about my decision, and I really couldn’t understand the reaction of Xavier and his co-workers.

I was still flabbergasted when I drove back in my Lamborghini to my trophy wife in our penthouse on the beach (“Her penthouse after the divorce,” one of her lawyers informed me at my wedding party). By the way, she was furious when I told her what had happened.

Meanwhile the webmaster of BGFed.be will go berserk and because this is a backgammon website I will, for good measures, include a backgammon position, completely unrelated with the story above. 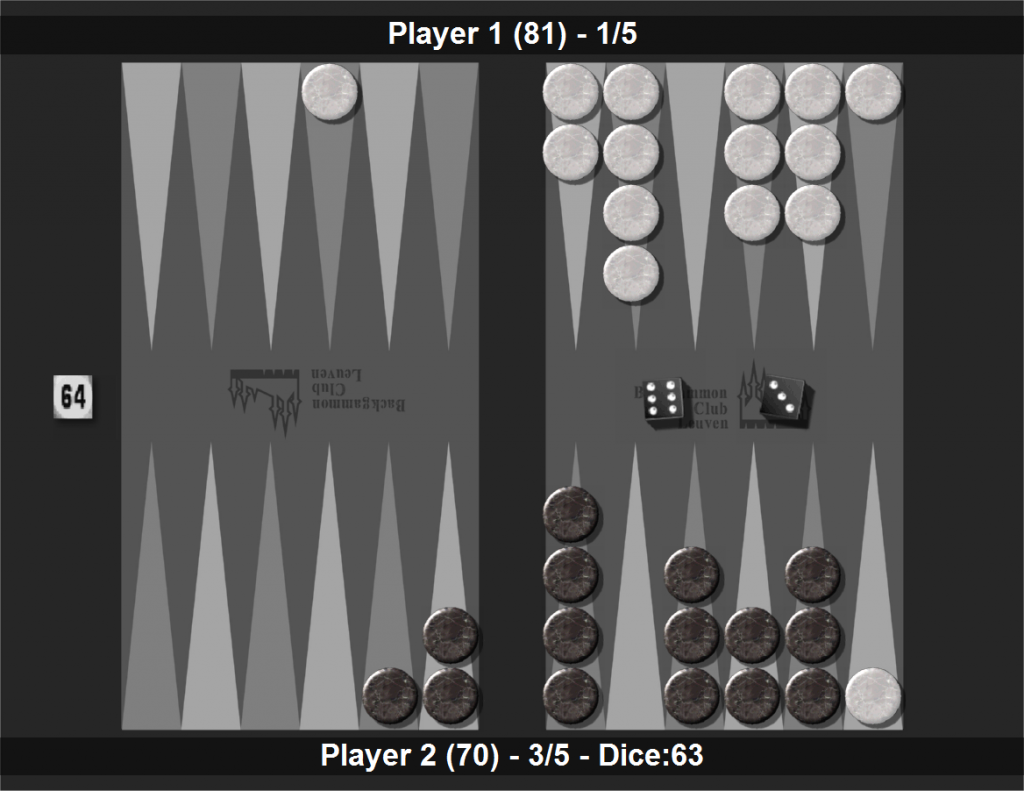 I was witnessing the match. Black was leading 2-away/4-away with the cube still in the middle. He played the safe 8/2 6/3. After the match I told him that in this sort of positions you have to push the defender away. 7/1* 4/1 is the move. Every backgammon hustler knows this.

Admittedly … there is a little risk involved with 4 immediate hits from the bar (52 and 53), and 55 would be the start of a close race. But after 8/2 6/3 the position of Black is by no means safe. And in fact a few moves later (after he correctly doubled and his opponent erred with a take) Black had to leave a blot, was hit and lost the game and match. But that’s of course immaterial for the decision he has to make in the diagram position.

As I expected, the bots confirmed my explanation with cool and undisputable figures.

This entry was posted in Instructional. Bookmark the permalink.

2 Responses to The Alligators of the Cayman Islands