As I mentioned in my first report, Friday morning I visited the new playing room. It’s a very nice place, well suited for the occasion. I repeat that the hotel is an excellent venue for such a tournament and the organisers made some good deals with the management.

Guy lost his match in the fighters bracket against Italian Fabrizio Lo Surdo. Guy doubled correctly at 2-away/-3-away, but was sadly punished for his decision after a hit in the bear off.

I will not cover the Intermediate tournament, because I would plagiarize the book Catch 22. In short: after the 7th round, the director decided to stop the tournament. Zsolt and Maurits finished equal third with a 5-2 score. Maybe the interested reader can contact Zsolt and Maurits for more information, because maybe they know and understand what happened. I don’t.

Before the start of the official program, the Belgium team had a photo session. Dressed to kill in their outfit generously provided by the Brugse Zot brewery, we gathered in the garden of the hotel. I suspect that the 8 players are considered by their environment as “sensible”, but when a camera appears, panic strikes. On the photographs you see smiling faces, but you can never imagine the fierce struggles and discussions that lead to these innocent pictures. Personal note to myself: if incarnation exists, never become a photographer of models or actresses in a next life. 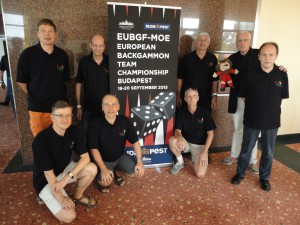 The team tournament started half an hour later as scheduled. Again, I will refrain from any comments on the openings procedures. At the moment as we speak, our president Guy is participating at the general assembly of the European Federation where these matters will be discussed. He surely will inform you later about everything.

The team competition is a Swiss System tournament with 15 teams and 7 rounds. The top 4 qualifies for the play-offs. It is still not clear if match points or board points takes preference. In every round a team will have a bye, which can lead to very annoying situations in the final round. The team with a bye wins the match 3-1. Playing time for the 15-point matches is 40 minutes + 12 seconds but breaks are included in the players‘ time. This system was also used at the first Brugge Backgammon Day, and we were convinced that this was not a good idea. In Budapest I see the same tendency: people hardly take a break and use their time playing, which of course delays procedures. 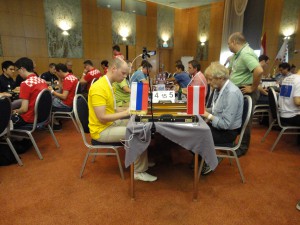 The tournament in full swing

I don’t know how much detailed information about the results is distributed on the internet. But it seems that the most important results are already known by now. Belgium received the bye in the first round. This gave some accidental bypassers the opportunity to watch proceedings.

In between two Thai massages …

In the second round we had four close matches against Austria, of which we won 3 (Michel, Geert and Walter) and lost 1 (Zsolt in DMP).

The score board on large screen.

Although scheduled for 10 o’clock, the third round only started around midnight. Michel took the sensible decision to go to bed, and to have a fresh start tomorrow. Again, all four matches were very close. Walter en Maurits lost, but around 3 o’clock, things went our way. First Geert won his match, and shortly before half past 3, I scrambled home with my last checkers. Final score: 2-2. Belgium has not missed the start of the tournament.