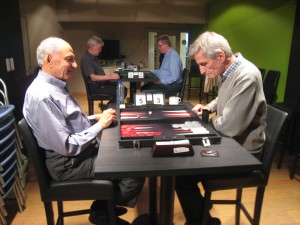 Brugge-Leuven was scheduled for June, but the home team proposed to switch battlefield to Leuven and time of action one month earlier – a most generous proposal. Was there weakness in the heart of the Ogre? Nay! Brugge wished to start the fight in full force, and this could only be accomplished in these circumstances.

But, beware future adversary of the Fighters from Leuven! These man can not be lured with such simple tricks. Henri Pollet, a soldier of many a war, smashed his first two opponents into smithereens. And an objective observer informed your reporter that Mr Soltani held the throat of Belgian’s number one Michel Lamote with both hands in an iron grip, and only had to release his opponent at the last moment. 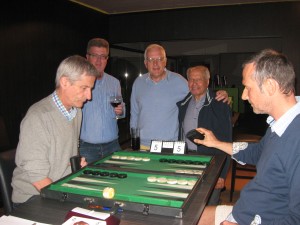 With the score tied 3-3, darkness looming over the bloody and messy battlefield, all subtleties were thrown overboard, and Brugge switched to their final strategy. With pure brute force they overcame the last hurdle in this heroic battle.

Returning home, sweat streaming down their faces, they muttered “mission completed”. But let there be no misunderstanding! This was not the usual Ogre’s roaring voice, which is feared by all foes; this resembled the sound of a peeping mouse.

(The second match of the third round Gent-Hasselt will be played as scheduled on Tuesday, June 16th in Gent)

This entry was posted in The 4 Cubes and tagged Brugge, Leuven. Bookmark the permalink.