Seven victories in a row guaranteed success for Bert Van Kerckhove at this year’s Gent Open. This is quite a feat since Bert organised the event and had to take care of all kinds of practicalities in between and during matches : 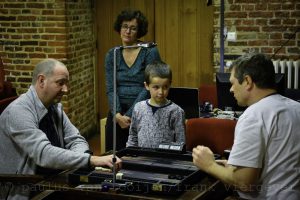 As always, the event was held at the Sandeman Club in Gent. Amid the medieval brickwork, 25 players signed up to play seven 7-point matches with only 12 minutes on the clock : 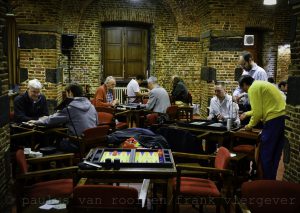 The playing area at the Sandeman Club.

When the dust settled, Bert was the last man standing with 7/7.  Closest on his heels was Johan Huyck (6/7).  Marc Van Damme, Paulus Van Rooijen and Ronny Conaert scored 5/7 : 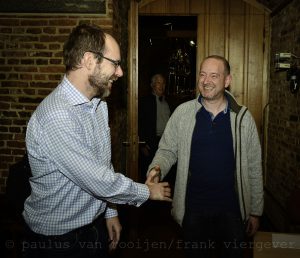 This edition of the Gent Open was a success. Sandwiches kept coming all day through and quite a lot of players stayed on till long after the prize giving ceremony discussing the future of Belgian backgammon, the bad luck they suffered, the merits of Leffe blond, and plenty of other banalities.

In short, it was a fine backgammon tournament.

This entry was posted in Tournaments and tagged Ghent Open. Bookmark the permalink.