In Brugge, 10 of the best players in the Low Countries gathered to compete in a consulting doubles contest.  Each team played 4 matches (9 points) with generous time allotment : 15 seconds/move and 27 minutes in the time bank. Players had sufficient time  to discuss checker plays and consider cube actions. 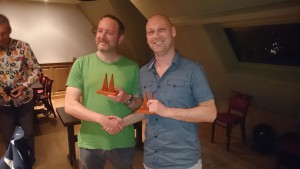 Bert Van Kerckhove (left) and Rogier van Gemert (right), winners of the Brugge 2016 Double Consultation, both on result and on PR.

At the end of the day, two teams had won 3 and lost 1 : Bert Van Kerckhove/Rogier Van Gemert (NL) were declared the tournament winners because they had beaten Johan Segers/Luc Palmans in their mutual duel. Congratulations to winner and runner-up.

In this tournament all matches were recorded live. A prize was also set apart for the team who put down the strongest performance. Half an hour after the last dice shake, XG delivered the verdict and, lo and behold, the winners appeared to also have played best : Bert and Rogier scored a world-class 3,48 PR. It was a close affair though, since the 2nd best performance was only 0,26 off : Walter Meuwis/Michel Lamote were only marginally outplayed with 3,74 PR. Ironically, they did not manage to win a single match (0/4). Geert Van der Stricht/Johan Huyck managed to end within one of the winners with a 4,41 PR.

The tournament was an initiative of Paulus Van Rooijen set up in cooperation with Brugge BC. A special word of thanks to Robin Bilderbeek for handcrafting the trophies and transcribing 4 matches and to Walter Meuwis for processing the data and transferring the match files to all players. Thanks also to Mireille and Pol of the Hollandse Vismijn for providing the accommodation and the professional service.

Hopefully we can look forward to a second edition somewhere in the not too distant future.

This entry was posted in Tournaments and tagged Brugge. Bookmark the permalink.