At Longchamp, 26 players showed up to contest the 1st Belgium Backgammon Championship 3-point matches. The initiative was taken by BGFed.be President Guy Van Middelem, who also sacrificed his own chance for glory by acting as TD (Tournament Director).

The event was won by Robin Bilderbeek (Gent BC), who celebrated his return from a 2-month backgammon sabbatical by winning 13 out of 14 matches : 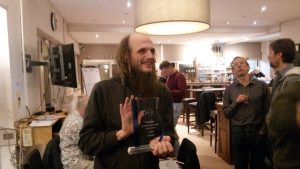 This stunning result did not come as a suprise to the members of Gent BC, who have seen Robin make significant progress in the past year. Robin has played several BMS Series ( = pre-designated series of longer matches) and is in the habit of filming, transcribing and analysing his matches as a means to improve. Now hovering on the brink between Advanced and Expert level, Robin is poised to lift his game to an even higher level in 2017.

Closest on Robin’s heels was Maurits Pino (Brussels BC), who won 12 out of 14 matches. Maurits exerted pressure on Robin till the last rounds, but Robin ended his triumphant campaign with resounding victories over team buddy Bert Van Kerckhove (Gent BC) and former (and future?) backgammon master Marc Vandamme. Congratulations Robin!

The classy trophy was donated by BGFed.be and professionally presented by Master of Ceremonies Guy.

Next event on the calendar is the 12th Gent Open Backgammon (Saturday 8 April 2017), where 7 rounds of 7-point matches will be played. For info, contact : bert.vankerckhove@skynet.be.

This entry was posted in Tournaments and tagged Longchamp. Bookmark the permalink.