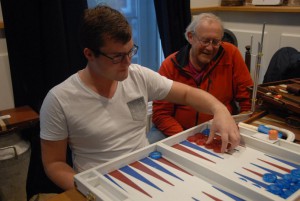 If you record and transcribe a batch of five 9-point matches for a total EP of 45, very seldom will the resulting Performance Rating (PR) deviate substantially from the players’ known playing strength. It was known beforehand that Christian Sörensen (24 – see profile below) played better than Belgium’s Best, but … hey… that remained to be seen, right?

Well, here it is : a PR of 2,99 is absolutely stunning. This is a Super Grandmaster performance (PR < 3) that will resound on all continents. True, the opposition was average, so it is well possible that cube decisions were not as difficult as they would have been again stronger opponents. Christian may also have been circumstantially lucky in that he was mostly crushed in his matches, so was not faced with complex, creative opportunities. Nevertheless, this result proves without any doubt that this player has the potential to reach the absolute top in backgammon. Congratulations, Christian! And thank you for coming to Brussels and showing us the stuff Grandmasters are made of :

In the shade of that oak, some lesser vegetation tried to get a ray of sunlight. I was able to play at Master Class 1 level, which is encourageing, and Geert has to be delighted with a fine 4,78.  Both Johans will probably be slightly disappointed not to have dipped below 6. Further down, Paul and Guy could not rise above themselves and Zsolt, Johan V. and Nick know that the road ahead to Advanced level will be hard.

A word of thanks to BMS(BE) (i.e. Geert Van der Stricht, Johan Huyck and Walter Meuwis) for organizing and orchestrating this event, and to BGFed.be for their encouragement and support.

This entry was posted in BMS(BE), Tournaments and tagged Longchamp. Bookmark the permalink.