With an amazing streak of 6 consecutive wins, Johan Huyck (Gent BC) became the convincing winner of the 1st BMS Belgium tournament.  After having beaten Paulus Van Rooijen (NL), Guy Van Middelem, Honza Cerny (CZ) and Walter Meuwis in the first 4 rounds, Johan won a crucial duel against the young Czech grandmaster Zdenek Zizka to take 5/5. In the 6th and final round, Johan was able to keep Maurits Pino (NL) from a shared first prize by scoring his 6th victory. 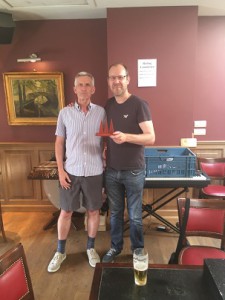 Top favourite Zdenek Zizka (CZ) was knocked out of contention in the 4th round by Guy Van Middelem (Brugge BC)  and had to content himself with a meagre 2/6. Same for Michel Lamote (Brugge BC – 2/6). Both players can hope for some consolation in the form of respectable PRs. All 10 players are currently transcribing the 30 matches (13 points) and eagerly (anxiously?) awaiting the performance evaluations.

BMS Belgium would like to congratulate all participants on their gentlemanly conduct and good-humoured competitiveness and especially the Czech delegation for travelling 1000 km to come from Prague to Brugge and being great sports.  Robin Bilderbeek handcrafted the trophy.