On 15 and 16 September 2018, 26 players competed in a BMAB event in Nottingham. Typical for these BMAB events is that ALL matches are filmed by the tournament organization (i.c. Rick Janowski) and that the overall PR’s of all players are incorporated in the International BMAB list.

Eager to make progress on that list, Geert Van der Stricht and I made the trip. Geert took a Friday night flight and I went by ferry and car on Thursday. Afterwards we were both happy. Geert won the event with 5 victories out of 5 matches (Geert was tied first with Lawrence Powell, but won the 1-point decider for the trophy) and I shared 2nd prize in the PR contest with a morale-boosting performance. Also part of our satisfaction was the fact that the hotel is supremely located close to Midlands Airport, offers great rooms  for about 65€ (with English or continental breakfast) and is organized with strict adherence to the schedule. 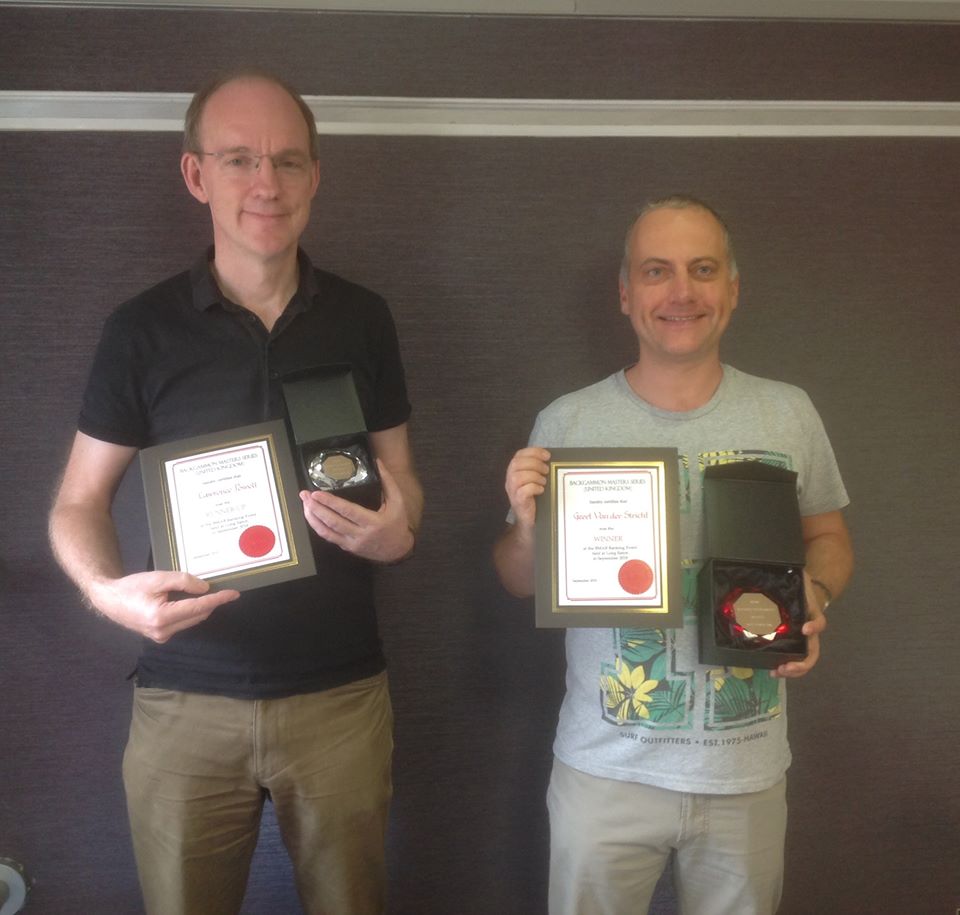 The PR prize was won by GM Sebastian Wilkinson from England (aged 28) with a PR of 3,2 or thereabouts. For Geert, cube actions in lopsided scores against inferior opponents proved to be a delicate balancing act and this is reflected in his PR. As we can see from the Player’s Profile below, Geert’s cube play suffered greatly from the fact that he was mostly far ahead in matches against weaker players. Adjusting with the cube is the first thing you should consider if there is a significant skill disparity and you play to win, but if you play for PR at the same time, this can have a ruinous effect on your Cube PR. Also Geert’s Checker Play PR, while very strong, is slightly below what he is capable of :

In that respect, I had an easier task. I lost my first round match and could bury my hopes of winning the tournament. I could take the factor “winning” out of my decision-making process and focus solely on making the objectively optimal choices. This benefitted my PR greatly :

After this event, Geert and I remain in close proximity on the BMS Grading Table. We are both about 0,4 PR point behind Belgium’s uncontested number 1, Marc Van Damme.