Back in 2001, when I was a novice to the game, Marc Van Damme (47) was already a player of some stature. In Paris, where Marc had shown up with Bert Van Kerckhove, Marc reached the finals of the Advanced flight and it was there that we met. There was no ExtremeGammon in those days, but Marc used Snowie (the predecessor of XG) with keen interest. This already made him a formidable player back then.

Then Marc mysteriously disappeared from the backgammon scene. We will have to wait for his autobiography to find out the how and why, but now Marc has resurfaced. With a splash… 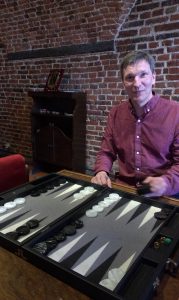 On four consecutive Tuesday afternoons in March, Marc and Robin played, recorded and transcribed eight 9-point matches. The 50 € question before start of play was : has Marc’s talent grown stale, or is class perennial?

Here is the answer :

Jaws dropped as the first results became known : Marc played a couple of matches with PR’s below 3, which is about the absolute best a human can perform. Bystanders did agree, however, that Marc was not really challenged in those matches and that, faced with more complicated subject matter, his PR would probably deteriorate. In the end, this is what happened, but the overall result is still remarkable. Combined with the PR’s achieved in a Master Series with Johan Huyck, Marc has usurped the top spot on the BMS Grading Table : PR 5,10 (1) (!).

This convincing performance gives Marc provisionary Master Class 2 status. Why provisionary? Because a player needs 150 EP (Experience Points : the total of match points played) for his grading to be validated. Marc is still 45 EP away from that threshold. Consequently, the five 11-point  matches which remain to be played in his Master Series against Johan Huyck become extremely relevant. Sustaining this respectable level of play will instantly gain number 1 status in Belgium (BGFed.be has proactively sent an order for laurels to Crete), whereas slackening performance might push Marc back to lower ground.

Robin played his dignified part in this high-level contest and stoutheartedly held his ground against his more skillful opponent :

This PR appears to reflect Robin’s current level of play pretty accurately. It seems only a matter of time before Robin will reach Advanced Class 1 Expert level (current standing : PR 7,62 (11).

1 Response to BMS : the comeback of Marc Van Damme.