As the countdown to the European Team Championship starts, I picked some of the photos taken during last year’s edition in Budapest to share with you. 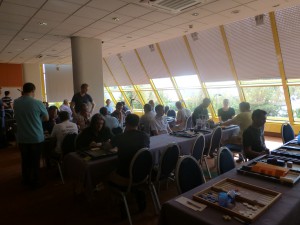 The European Championship was preceded by the Budapest Open. The masters division was played in the Panorama room. The shutters had to be closed because of the scorching sun; outside temperatures reached 35°C. 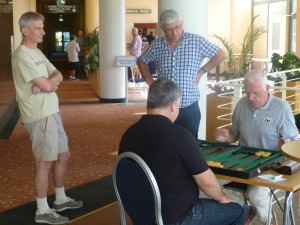 Guy Van Middelem (right) preferred to play in the more spacious lobby; Michel Lamote and Alain Chif are watching. Guy had a good start, winning the first two matches but lost to a Norwegian player in the third round. 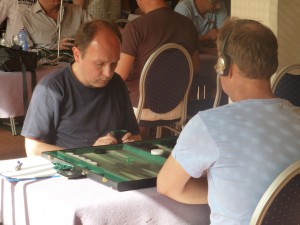 Luc Palmans (left) playing Tore Frederiksen (Norway) in the first round. After losing this match, Luc had to continue in the fighter bracket. After an easy win in the first round, Walter Meuwis (left) was leading 10:7 (in an 11-point match) against top Danish player Thomas Kristensen. Michel Lamote keeps his fingers crossed but finally Walter had to surrender. 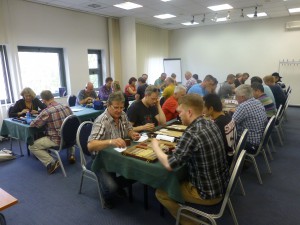 Players of the intermediate division in the Venus room, including Maurits Pino and Alain Chif. The lady on the left, Laurence Sinitzky-Billard went on to win the tournament without loosing a match. Spectators admiring the skills of the blind British player, Yan Kit Chan (right). Occasionally he palpates the checkers but in general he keeps the position of all the 30 checkers in mind. 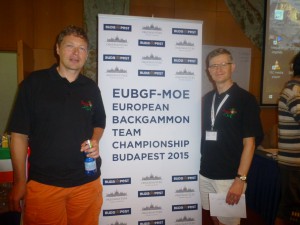 After several changes of the rules and some discussion with the tournament director, Maurits Pino (left) and Zsolt Tasnádi won a shared third price in the intermediate division – in fact shared with three other players. 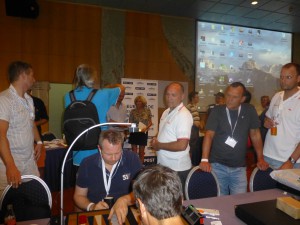 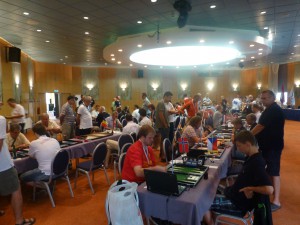 … but finally it started, although without Belgium who was bye. Zdeněk Žižka, the 17-year-old Czech talent is on the right playing Bjørnar Bugge (Norway). Walter Meuwis, Luc Palmans, Maurits Pino and Geert van der Stricht (from left to right) starts the night shift facing Greece in the third round. Luc was the last to finish at around half past 3, the final score was 2-2. 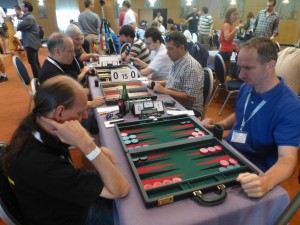 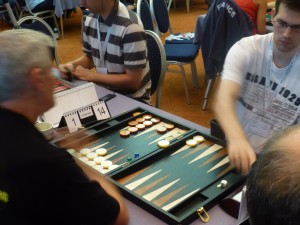 Michel Lamote (left) playing the Crawford game against János Baranyai (Hungary). Nothing went right for Michel in this match. His opponent finished the tournament with an impressive 7/7 result. After two draws (against Hungary and Croatia), Belgium faced tournament leader and top favourite Denmark. Luc Palmans (left) contemplates an 8-cube against Mik Larsen. Doble/take, well played by both players. Luc won this game but sadly he lost the match 15:13. Michel Lamote (right) faces Thomas Kristensen (Denmark), deploying two chairs to get a better view of the board. In the background, captain Guy van Middelem is joking with his Danish colleague. At this time we were confident, with all four Belgian players leading. Geert van der Stricht plays Steen Grønbech (right). Geert was very close to winning but Steen rolled a 44 to enter his 2 checkers in a 5-point board, turning the game and the match around. This match was live streamed on the website of the Danish federation. Kristensen redoubled at this position. If Michel takes and redoubles to 8, he can play for the (15-point) match. Tough decision, he preferred to start a new game. 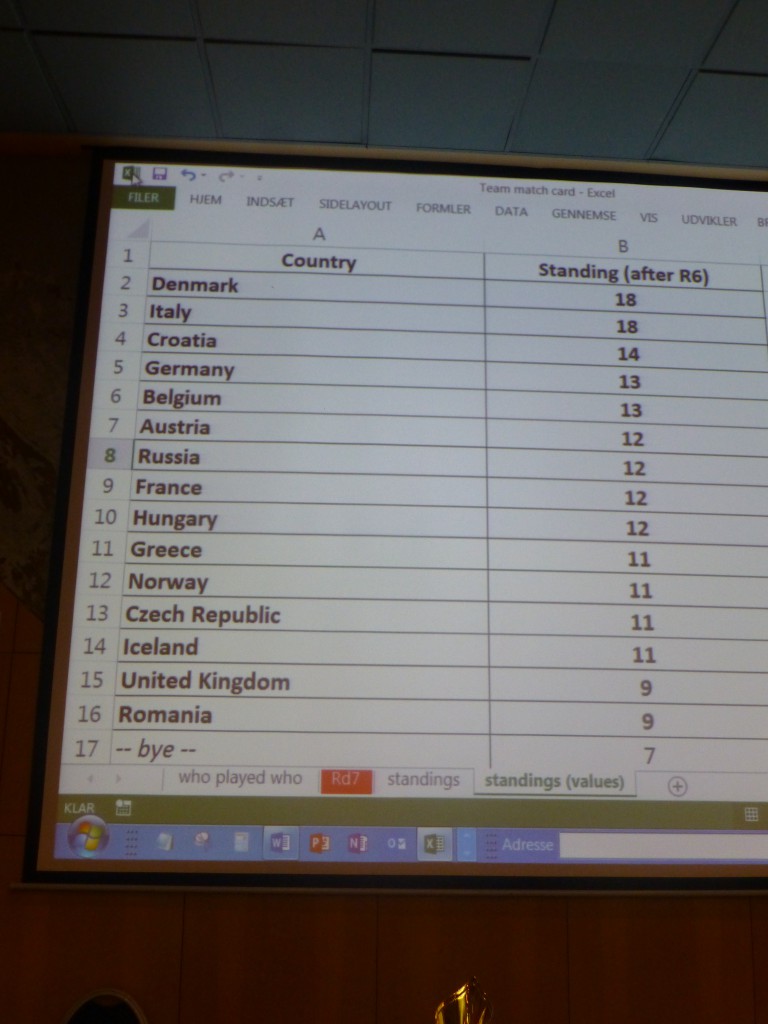 Belgium lost 1:3 to Denmark (Walter Meuwis won his match) but, before the last round, still had a realistic chance to make the final four. In the last round, we played Italy who already secured their place in the semifinal. Because of the other results, in particular Germany’s surprise 4:0 win against Denmark, the team would have needed to win all four matches in order to qualify for the final four. Alain Chif (right) won his match but the final result was Belgium 2 – Italy 2. Denmark and Germany met again in the semifinal. After a 2-2 draw, the encounter was decided by a 7-point team consultation match. Germany made it to the final. An interesting position from the final. Looks simple but in fact white has several options to play the 2:1. Some good players among the spectators could not agree what the best move is.

The European Championship starts on 20 October in Helsingør, Denmark. Good luck to the Belgian team! Read the introduction of the team members here.

This entry was posted in EUBGF, Tournaments and tagged Budapest, European Team Championship. Bookmark the permalink.