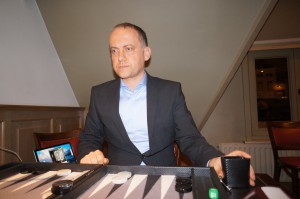 If you want to compete at the highest level, it is absolutely necessary to familiarize yourself with the dynamics of long matches.  Certain cube decisions can be pretty plain at a normal score, but can become quite sophisticated at scores like 12-away 5-away.  A player with no schooling in long matches will be like a 17th-century mariner on a nocturnal ocean without a compass.  Of course, if the skies are clear, he can navigate by the stars, but what if it’s cloudy? Experience with long matches is the compass without which you will be – and I weigh my words – completely helpless when faced with (re-)cube-decisions in, say, a 15-point match.

To become more acquainted with this subject matter, Geert and I have played another set of ten 15-point matches.  Here is how we did :

Once again we see that playing the checkers is not the issue.  Checker-plays do not differ much depending on score.  You can practise that aspect of the game as well in a 3-point match as in a 15-point match.  The cube is a different story, however.  Both Geert and I made some skilled cube decisions in our ten matches, but also messed it up way too often. Since  cube blunders tend to be  costly as far as equity goes, this has an extremely detrimental effect on our respective PRs.

En forgeant on devient forgeron, my father used to say.  It is now up to Geert and myself to review the matches we played, study our errors and blunders and hopefully gain some insight from that.

You can see  these performances reflected on the BMS Grading Table.  Just click on BMS(BE) in the black banner above.