In the most recent update of the rating list, Michel Lamote is the first player to have a rating higher than 1900. This is mostly symbolic of course, for the difference between 1895 and 1905 is the same as the difference between 1450 and 1460. Still, what does it mean to say that Michel’s rating is more than 400 points higher than average? The answer is given by the rating formula.

The rating formula converts rating differences into match winning percentages. It underlies the computations needed to apply the rating principle. According to that principle, the number of rating points that Guy wins if he defeats Michel is proportional to his chances of losing the match. And if Guy would lose, his loss would be proportional to his chances of winning.

So how to know Guy’s chances to defeat his friend Michel? According to the rating formula, the odds depend on two things:

The exact formula is a mathematical curiosity founded in statistics and originating from chess. If you want to know more, check out the article Ratings on Backgammon Galore!. 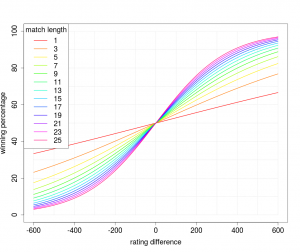 What’s your probability of beating Michel? Calculate the difference between your rating and his (it’s probably negative), choose a match length, and read off the answer on the vertical axis. Click on the image to enlarge.

See the picture on the left. (Click on it to enlarge.) Each line represents a match length. Calculate the difference between your own rating and your opponent’s. Find this value on the horizontal axis. On the curve representing your match length, find the point corresponding to that rating difference. Then read off the percentage on the vertical axis. That’s your match winning percentage.

Suppose for instance that Annie’s rating is 200 points higher than Bob’s. They play a 3-point match. Following the orange line, we find that Annie has about 60% chances of winning the match.

Of course, all this is but a mathematical idealization. Ratings are volatile. If you have a lucky streak, your rating goes up. That doesn’t mean that your chances of winning future matches have suddenly gone up accordingly. Likewise if you’re having a bad week.

As a measure of your playing strength, your average rating over a period of time is probably a more accurate measure. (Even better is to analyze your matches by the merciless scalpel of the machine.)

So by all means, don’t take ratings too seriously. Don’t let them spoil the fun! If your rating goes up, great. If it goes down, just blame it on the dice and wait until the sun comes out again.

And now: go and check out your latest rating.

This entry was posted in Ratings. Bookmark the permalink.