As I have written before, playing a Master Series (MS1) is a good way to play longer backgammon matches without the pressure of win-or-lose.  Players can focus solely on the objective correctness of their decisions and need not worry about trivial things like prestige and/or money at stake.

In the last week of 2015, Guy Van Middelem and myself played six 15-point matches, which we filmed and transcribed.  Here is how we performed :

How significant are these data? Well, it is most likely that they are pretty reliable.  Since my official BMAB-grading is Master Class 2 (between 4,75 and 5,50 PR), it looks like my performance was average.    As for Guy, although the sample is on the small side (only 90 EP), it is pretty likely that his PR here is also average, which means somewhere in the ballpark of his true playing strength.  Is it a coincidence that Guy’s  PR on the BPR Rating Table (which reflects performances in predominantly shorter matches) is … 8,98 (50 EP)?  I do not think so.  Until further data become available, it is probably fair to assume that Guy’s playing strength is Advanced Class 3 (between 8,50 and 10,00 PR).  It is now up to Guy to prove that this provisionary grading is off the mark.  He can do so only by submitting more transcribed matches to BMS (by playing a MS or a BPR cluster) and, most importantly, by … playing better. 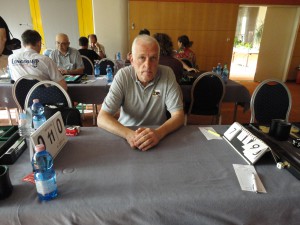 Guy … waiting for you!

What is your level of play?  Are you just a Beginner? Can you call yourself an Intermediate player? Or have you reached Advanced level?

One thing is sure : your own assessment is untrustworthy.  We all over-estimate our own skill level.  For some time I lived in a rosy world where I thought myself a World Class player.  I now know this was nothing less than self-delusion.  As for you, you can ask a good player what his estimate is of your level of play, or, better still, you can try and play the best you can when you are playing a match against someone who is filming.  That way you can gather some reliable info as to your skill level and get a pretty accurate indication of your playing strength.