Twenty-three players registered for the Belgian Individual Championship in 2015: 8 in Division 1 and 15 in Division 2. Compared to previous editions, a new rule allowed D2 players to reach the BIC final in December and go for the BIC title.

In D1, after 7 rounds from January till September and 56 13-pointers, Michel Lamote, Belgium n°1 player, started with 8 victories out of 8 matches, emerged with 10 victories & 4 defeats and grabbed a place in the final. Luc Palmans (9 victories & 5 defeats) finished 2nd and Alain Chif beat Zsolt Tasnadi in a play-off to clinch the 3rd spot.

Meanwhile, the battle to avoid D2 was heavy. Maurits Pino (finalist in 2014) and Paul van Dijke played quite unlucky, their fate was rather quickly sealed. Walter Meuwis (winner in 2014) and Guy Van Middelem (finalist in 2013) reached average (7 victories & 7 defeats) but that was not enough for Guy who lost in a crucial and long play-off against Walter.

In D2, divided in 2 groups, after the round-robin and 98 11-pointers, Geert Dooms had an outstanding run to place 1 in Group A, qualifying for D1 2016. In Group B, Sassan Kachanian tied with Leonidas Sotiriadis but their mutual encounter was 2-0 for Sassan, who qualified too.

Geert beat Sassan in the D2 title match and Leonidas prevented a first woman ever in D1 by winning against Annick Hasdenteufel in a play-off for the 3rd qualifying spot.

In the quarter-final, Alain Chif beat Geert Dooms. In the semi-final Luc Palmans beat Alain. The final would be the expected one between the 2 best D1 players, Michel Lamote & Luc Palmans, in Longchamp on Friday the 18th of December. 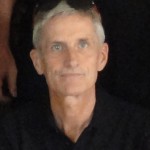 Played in the afternoon, the first set went to Michel. The venue, Les Brasseries du Longchamp, was nearly crowded for the live evening representation. And what a show it was! Thanks to the fantastic job of Nader K. Rad, with help from Johan Segers, and with the skills of commentator Walter Meuwis, the audience (young & old, novice & experienced) saw a high-level backgammon match to 13 points on a big screen, with live computer analysis. Michel Lamote prevailed after a breath-taking take of a 4-cube to win 2-0. The favourite deserved his 1st BIC title – congratulations!

Wishing you all great games in BIC 2016 (which has started already)!