The final, nocturnal game of my second BIC match against Eric Aries was marked by some interesting high cubes. We’re playing at my place on a Friday night (August 14, 2015) and we are keeping ourselves awake with coffee, dark chocolate, and dried fruits. A jazz music TV channel fills the room. The score is equal, 4-4, in a 11-point match. 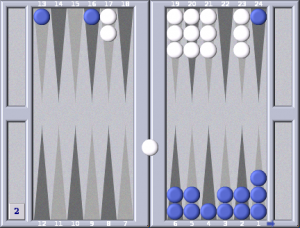 In Position 1, I (playing blue) am pondering a redouble to 4. After some reflection, I decide to go for it: the prospect of closing my board in the next move or two is too hard to resist.

The temptation is a treacherous one, however: according to a rollout by GNU Backgammon, the redouble is way too early (0,144 blunder). Eric correctly takes. I fail to cover and Eric fails to hit. 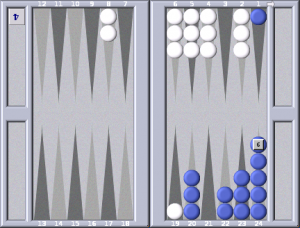 A few moves later, Position 2 arises, with Eric, playing White, on roll. The tide has turned and a redouble to 8 is in the air. Eric wants to go home (it’s after midnight already, it’s a one-hour drive from my place to his, and on Saturday morning he needs to get up early) and he turns the cube.

If I pass, I’m trailing 4-8 to 11 points: 7-away 3-away amounts to about 25% match winning chances, so my memory tells me after some effort. I guess that my chances to win the game are higher than that, so I take.

Both the redouble and the take turn out to be correct. My game winning chances with the cube frozen at 8 are about 29%.

Despite some heroic attempts, my straggler does not make it home safely and gets closed out. A few minutes later, Eric wraps up the game and the match. The weekend can start.

This entry was posted in BIC. Bookmark the permalink.