For the 10th time, Bert Van Kerckhove organized the Gent Open.  As always, the location was the Koninklijke Club Union Sandeman  in Gent.  This year, 24 players showed up to play 7 rounds of 7-point matches.  All matches were played with clock.

After 6 rounds, Michel was the only player left with 6 victories.  However, in the last match of the day, Belgian-born Nardy Pillards managed to beat Michel to draw even.  The tense match culminated in a thrilling DMP game where Nardy skillfully blitzed Michel off the board after a 52 (24/22 13/8) 55 (6/1* 6/1* 8/3* 8/3*) opening sequence. 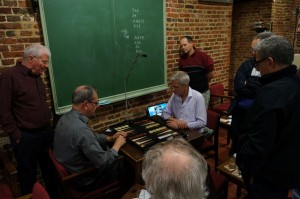 This left both players with 6 wins, but the trophy went to Michel because his opponents had collected more wins (Buchholz-system). 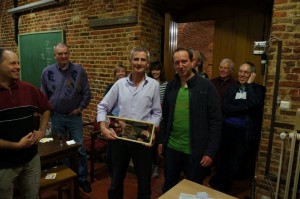 The Intermediate Division was won by Manolitto from Amsterdam.  He was one of 6 players from the Netherlands who had travelled a couple of hours to compete in Gent.  One of his opponents, Peter Allemeersch, was baffled by the fastness of Manolitto’s decision-making : “He played incredibly fast,” said Peter, “and ended the match with 11 minutes and 24 seconds left on the clock!”  Truly, an amazing feat. 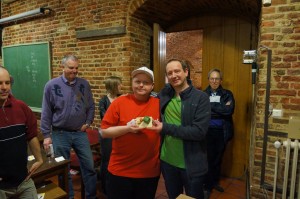 In the picture, Manolitto poses with the colourful trophy.  All three trophies were handcrafted by Gent club member Robin Bilderbeek.

The Beginner’s flight was won by Kristoffer De Weert.  In addition to the trophy, he received Bill Robertie’s bestseller Backgammon for Serious Players as study material. 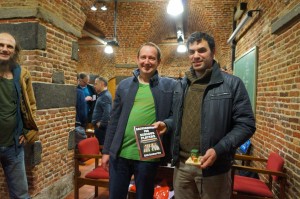 Kristoffer and Bert. On the left, trophy designer Robin.

This anniversary edition of the Gent Open was a success.  There was constant action and the playing conditions were excellent.  Congrats to organizer Bert for a job well done.

An extra word of thanks to the Dutch players who made the trip.  They gave the tournament an international flair and blended in perfectly with the predominantly Flemish crowd.