When Line, Peter, and I made the first steps towards organising a small-scale tournament in Brugge, we had no idea what to expect.  Would it work? Would the backgammon community show up en masse or would we be completely ignored? These were some of the anxieties we struggled with as our plans became more and more concrete.

Now that the event is history, we are delighted by the enthusiastic response we received.  Due to the limitations of our playing room, only 26 players could be admitted, so, with that number, we achieved maximum attendance.

Moreover, notwithstanding the required adherence to rules and schedule, all players effortlessly contributed to the success of the tournament.  Thier punctuality, sportsmanship, and placidity under duress were the key ingredients of a memorable backgammon day. 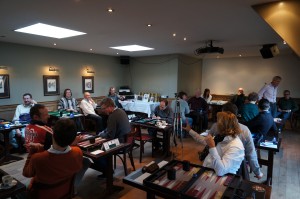 Also, with this low-threshold tournament, Brugge BC has tried to put some of the aims and aspirations of the recently founded BGFED (Belgian backgammon federation) into practice :

Hope to see you soon.