Michel Lamote : “We had to win 4 matches to win this title. First we beat two Turkish players, then a team from the Czech Republic. This brought us to the semi-finals where we beat Peter Blachian (2014 European Champion) and his partner. In the final on March 31, 2014, we faced two players from Austria: Henno Löbler and Friedrich Rattinger.

The final was played to 11 points. Readers can replay the match if they want (match record), but especially the last game was incredibly exciting. We were 3-away 2-away and were at a disadvantage in the game from the start. The game developed from a priming battle to a 1-3 backgame and culminated in a coup classique (see position 1). They rolled a 4-1 and Walter rolled a 2, so we were still alive. 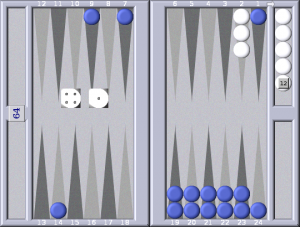 Position 1: Lamote/Meuwis (Blue) vs. Lobler/Rattinger (White). Blue is trailing 8-9 in an 11-point match. The situation looks desperate, but White rolls 41…

A couple of rolls later our opponents were considering this position (Position 2) : after discussing for 6 minutes, they doubled us. Now, what to do? 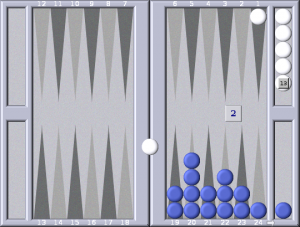 Position 2: White on roll. Blue, trailing 8-9 in a match to 11 points, managed to initiate a coup classique. After a 6-minute discussion, the White team doubles. Playing Blue, would you take for European Doubles title?

To be honest, I had no clue. We need 25% to take this cube, the equity we have if we were to drop and play from being down 8-10 Crawford. But how much winning chances do we have in this position? Do you know?

Walter Meuwis : “I knew this was a take. I was hoping that they were going to give it to us, so we could give it back to 4 and play for the match”.

Michel : “I was in no position to argue for a Pass, since I could not pinpoint our winning chances. So I agreed to take. This brought an excited murmur from the 20 or so bystanders (it was the last match played), who apparently could not believe their eyes. But the unlikely happened : we left a blot on the ace, got hit, managed to pick up the second checker and close them out. We then had to leave a shot in the bearoff, got hit and had to hit three times in the outfield to bring the position home.

After the match had ended, there was immediate heated discussion as to what the correct cube decision was. At last somebody checked the position on an iPhone and declared it was a correct double and a clear pass. Still, Walter kept daring everyone to place a 50€ bet on the correctness of his decision, finding some eager customers. Eventually ExtremeGammon was set to work (extensive rollouts were done) and the decision to Take proved to be correct.

Walter and I were happy with the trophy, but also with our performance : in the final we had a Performance Rate of 2,42 and even handled the cube better than the bot. Our average PR in the 4 matches played was 3,14, which is honourable, we think.

Hopefully, more players from Belgium will make the step to international backgammon. It is a great way to compete and some of our best players definitely have the skills to compete on the highest levels.

See you all later.”

This entry was posted in Tournaments and tagged Velden. Bookmark the permalink.